The journey from Lagos, Nigeria to Accra, Ghana started around 5.30am at Falomo roundabout, Ikoyi Lagos.

I had developed familiar phantom malaria symptoms some days before the trip, my mind’s attempt to give me an easy way out of the trip.

Once the journey started however, the only thought and feeling became the ride. Straight through the city we rode, towards the Lagos – Benin Republic border.

It’s difficult to describe the joys of riding to a non-rider.

The volume and rate of information to be processed forces the mind to drop all non-essentials.

The ride to the border was a nightmare. It was the worst part of the entire journey. The roads were filled with huge potholes, with portions of it completely devoid of paving.

After getting through this portion, we had to take a breather to stretch and rehydrate.

Regrouping half-way to the Nigerian border

Regrouping half-way to the Nigerian border

We got to the Nigerian-Benin border about 8am and waited another 5 hours while an “agent” sorted our papers. In hindsight, it should have been done individually. The experience was disappointing, and consistent with the border corruption experienced at each border crossing. The Ghanaians were the only exception. 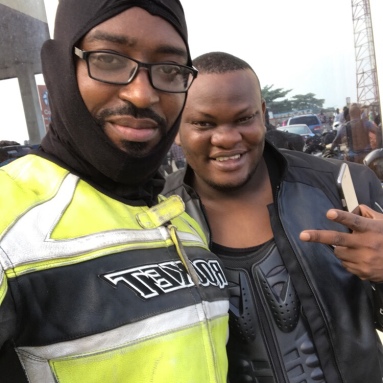 By the time we left the border, it was already 1pm Nigerian time. One of the Bikes had developed a fault which took another two hours to fix. By the time we were done, it was past 4pm, our estimated arrival time in Accra, Ghana.

We filled up on fuel in Cotonou. A full tank would take us to the Benin-Togo Border.

It was after this that the journey really began.

Through Cotonou we rode. It was already rush hour and there was a bit of traffic with more motorbikes than cars, and it was a common sight to see well-dressed women riding motorbikes.

It started raining about this time and surprise, the white road-markings became slippery. Most roads are specifically designed for four-wheeled vehicles. After my bike fishtailed a couple of times crossing over those lines, I quickly learnt to avoid them.

The scenery was spectacular. I wish I had a Gopro on my bike, it would have captured some of the scene. The process of stopping the bike to take a picture with my mobile phone is a lengthy one, and it wasn’t a good idea to get lost in a strange land.

There was a lot to see on both sides of the road. I think more people should travel by road. It reveals a unique picture of Africa not yet captured in the media.

After two hours, we got to the Togo border. It was 6 pm by this time. The estimate was one hour for processing.

Gists flowed around how good the roads were, the people we saw, the villages, and the unhurried lifestyle of the people.

We started making plans for our anticipated 10 pm Accra arrival… hit the Accra Friday night clubs with the Accra bikers waiting to receive us, sight-seeing the following day… you know, typical biker gist.

Unknown to us, our plans were busy being dismantled in heavenly places. 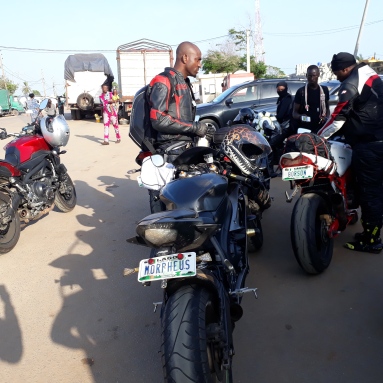 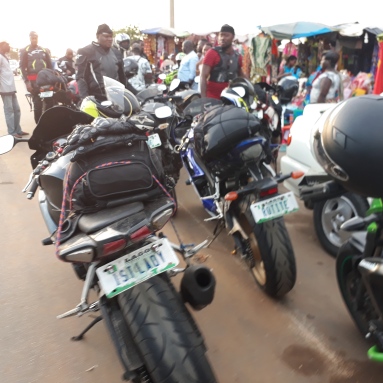 The document processing took longer than anticipated and by the time we were done, it was about 9 pm. We refueled just inside Togo, exhausted from the long hours of riding, and with Togo still to be crossed before getting to the Ghana border.

The estimate was that the Ghanaians would need about one and a half hours to process us. Hopefully, we could cross Togo in about an hour and reach Ghana before the border was closed for the night. Tiredness was already setting in, but the consensus was to ride on.

After being cleared, the journey continued through some of the darkest roads I have ever seen in my life. It was gut-wrenching. No streetlights at all, and no divider separating us from oncoming traffic. Too dark to determine if there were potholes ahead… I was really tense during this part of the trip, since I had to lead the entire group through that darkness.

We finally got to the border after about three hours of slow and careful riding. It was a huge relief, I tell you. 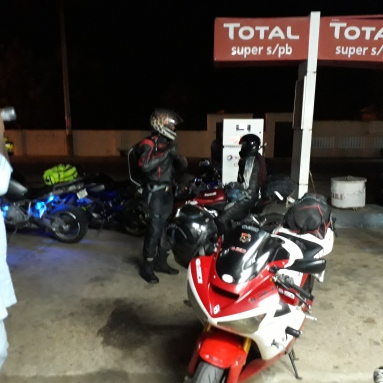 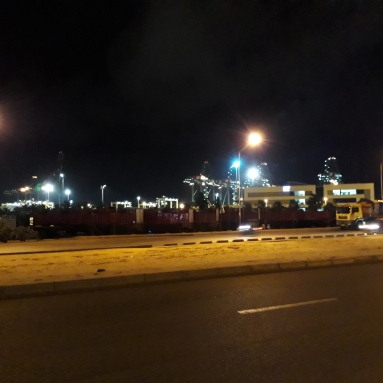 By this time, a few of us were considering sleeping at the border. The Ghanain Immigration officers  were meticulous in checking every letter on every VIN. I couldn’t believe it, at almost 12am we were looking for VIN numbers and reading it out while the bespectacled officer followed on his notepad, the only country that had checked VINs, and also the only country that hadn’t extorted us.

The morale was still high. I would have expected that tempers would be short by now, but no, we still jocked and laughed together. Going through adversity seems to brings people closer. 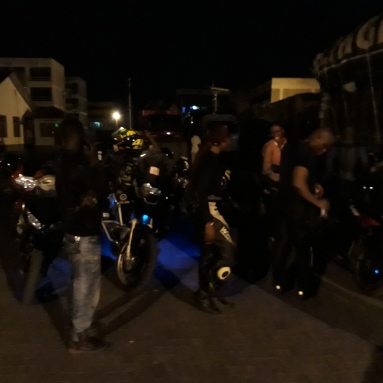 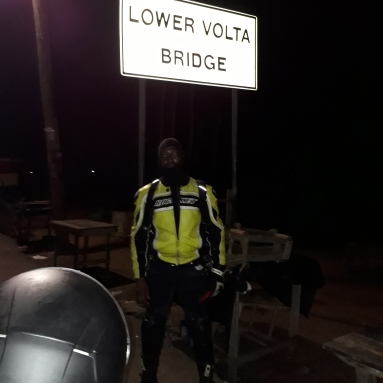 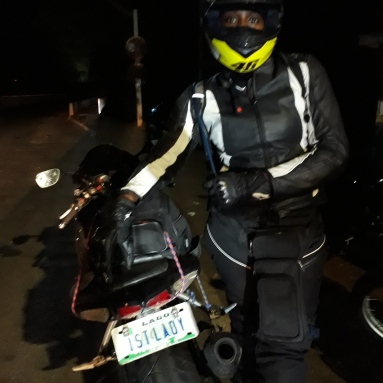 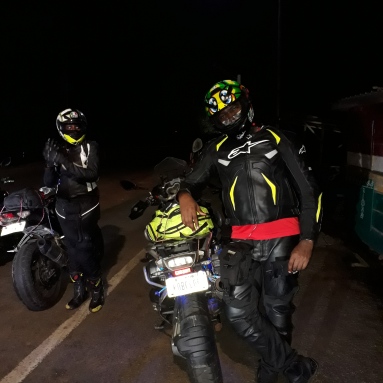 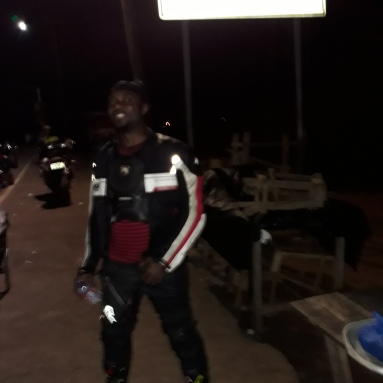 After being cleared, we set out for Accra, having been promised by some fast-talking Ghanaian that we could make it in 2 hours.

By this time, one of us had his clutch cable misbehaving, but thanks to amazing Germans engineering, the BMW was still moving excellently once it got moving. This same bike got back to Nigeria using only one gear (gear six), and still left a lot of us behind.  (I’m accepting contributions for my own BMW (GS) by the way. I don’t know of any other marketing that can beat what that bike did performance-wise.

It was at this point that I started dozing off.

I was deeply fatigued and I became worried I would fall off the bike. So I pulled-over on the hard shoulder and walked around.  The others didn’t seem to notice and I was soon the only one left on that empty stretch of road, with trucks whizzing past me in the other direction. i remeber seeing the distant lights of a village settlement twinkling through the bush.

By the time I got back on the road, I couldn’t see any bike, no matter how fast i rode, but thankfully my unofficial riding partner had noticed my headlights were missing, and she had stopped ahead to wait for me. She was worried something had happened, and was about to turn back to look for me when I appeared.  We road on together and met the others at the Lower Volta bridge.

We continued for what seemed to be forever, with drowsiness washing over me in waves until 4.30 am Nigerian time, Saturday 25th November 2017 when twenty-four hours after leaving Lagos, I rode with my crew into our hotel in Ghana. 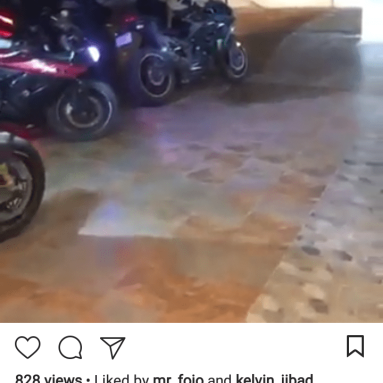